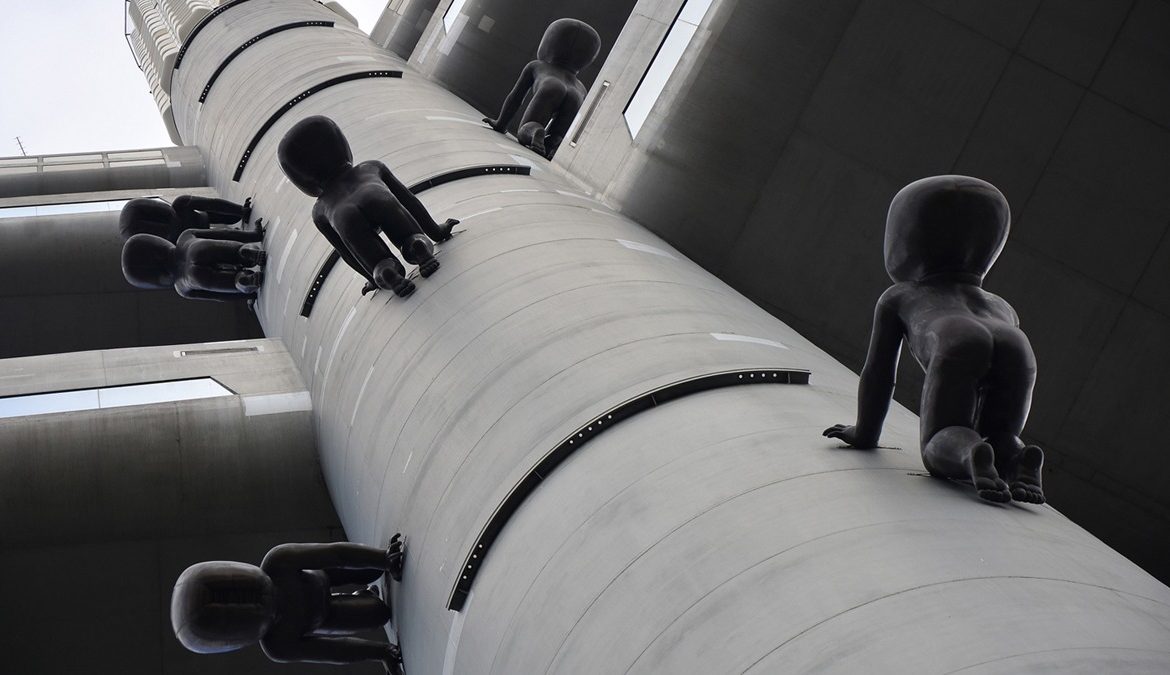 A defining feature of the Czech capital is its enchanting historic architecture. Prague’s fairy tale skyline is pierced by Gothic spires, its iconic river braceleted with medieval bridges. But zoom in a little closer and there’s also an abundance of witty contemporary sculptures that have become just as integral to Prague’s picturesque aesthetic. From local legend David Černý’s discomfiting crawling babies to Anna Chromý’s iconic but eerie Il Commendatore, here are some unusual sculptures to look out for in Prague.

At 216m high, the Žižkov Television Tower is the tallest in the Czech Republic – and widely attested to be the least attractive. David Černý’s addition of 10 fiberglass babies crawling up and down its steel exterior certainly adds an element of the surreal to the rocket-shaped spire, but whether their distorted, robotic faces improve on Žižkov’s communist-era aesthetic is a matter of opinion. Černý fans will find another bizarre cluster of babies, this time cast in bronze, crawling determinedly through Kampa Park.

Another fine example of David Černý’s wit comes in the form of Quo Vadis, a sculpture of a classic East German Trabant with its wheels replaced by four human legs. The humorous work, which is tucked away behind the German Embassy, belies a weighty message; it pays tribute to the 4,000 East Germans who stationed themselves here in 1989 while awaiting political asylum.

Memorial To The Victims Of Communism

At the foot of Petřín Hill, a staggered line of disintegrating men, cast in bronze, descend the stairs, with the last barely recognisable. The Memorial to the Victims of Communism by Olbram Zoubek, in collaboration with architects Zdeněk Hölzel and Jan Kerel, is the most harrowing in Prague’s portfolio of sculptures. Its poignant visuals detail the horrific records of those affected by the violence of the Communist period.

Another nod to a celebrated historic heavyweight, David Černý’s Man Hanging Out pays homage to the psychoanalyst, Sigmund Freud, who was born in Moravia, now part of the Czech Republic. The sculpture is a reminder to look up while wandering through Prague’s Old Town, as the suited Freud dangles by one hand from atop a building. It’s a comment on the intellectual’s own fear of death.

An eerie addition to Prague’s contemporary sculptures is Anna Chromý’s Il Commendatore, a cloak shrouding a faceless onlooker that’s hunched outside the grand historic Estates Theatre. It’s a smaller bronze version of Chromý’s original piece, the award-winning Cloak of Conscience, which is intricately hewn from white marble and is large enough to accommodate two adults within its hollow interior.