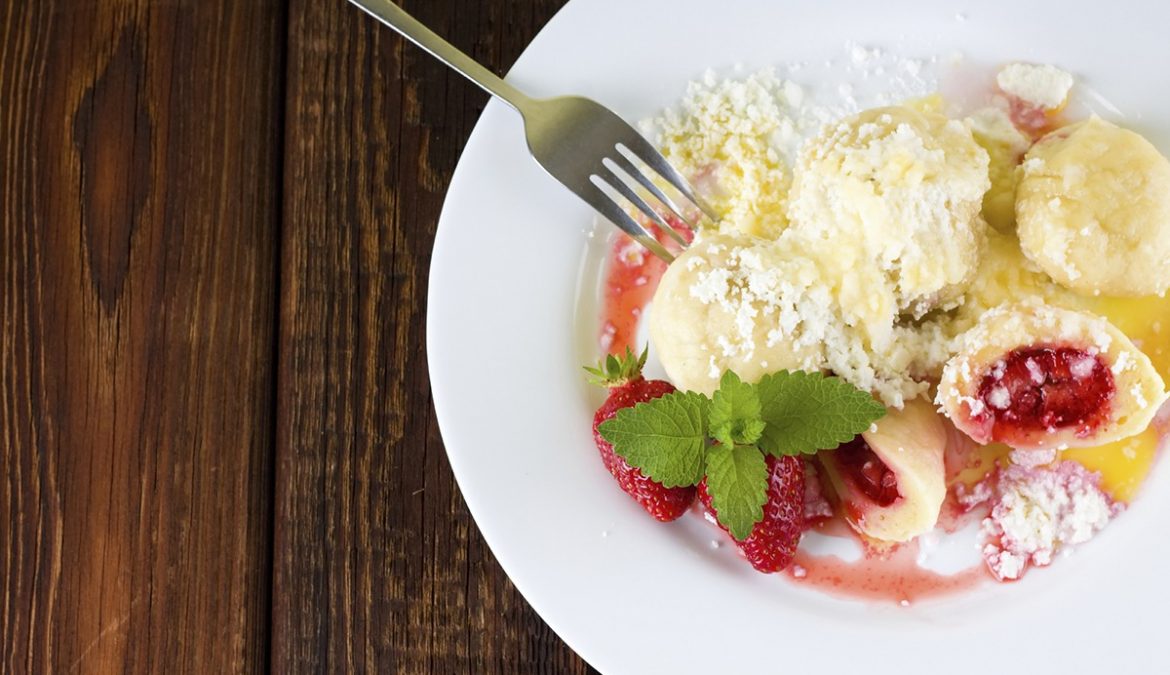 Dessert is a big deal in the Czech Republic, and this is further accentuated by the fact that dinner is absolutely never complete without pudding; which represents a fundamental part of the meal rather than an optional after thought. If you happen to have a sweet tooth, and are visiting Prague any time soon, then you’re in for a treat – quite literally!

Dumplings are a staple food within the Czech diet, and are generally made from potato or wheat. Served alongside a main course, or dressed up as dessert, you’re bound to come across these steamed balls of happiness pretty much with every meal. Sweet fruit dumplings are particularly popular and are mostly stuffed with fruits such as apricots or strawberries, fresh fruit jam, and served with a dollop of sweet cottage cheese, drizzled chocolate, or in my case, both.

The origins of this delightful dessert are highly debatable, with many arguing they were originally created in Slovakia. Nevertheless, they are one of the most popular sweets produced in Prague today, and definitely ones to keep an eye out for. Traditionally made out of pastry, which is cut out into strips, rolled around a stick and dusted with sugar and spices before being baked over an open fire to create a crispy caramel shell and warm fluffy insides. Trdelník are often freshly prepared and sold from vans located around the city and are generally served plain or, more recently, filled with Nutella.

We’d probably say that the Medovnik is to Prague what the Sacher Torte is to Vienna. Often referred to as honey cake, this traditional treat is unique mainly because it’s made out of ten layers of sweet crumbled cake that are held together by a honey and cream filling. Whereas you’d imagine it to be sickly sweet, the cake is actually relatively savoury and far from being sickly; we’d expect you’d ask for more.

Originally created as a wedding gift, Kolaches are probably one of the oldest pastries prepared in the Czech Repubic and includes small round pastries made from sweet yeast and topped with a speciality poppy seed mixture. If poppy seeds aren’t really for you, kolaches today are also served stuffed with blueberries, apricots, plums, and cheese among other fillings.

We like to think of Palačinky as the Czech version of European pancakes. Made in a similar way to crêpes, they are then stuffed with a variety of fillings that range from sweet cheese drizzled in vanilla sauce, all the way to apricot jam dusted with sugar and perfected with a dash of liquor if you’re in the mood to jazz things up.

Of course, this reminds us straight of Austria but interestingly, the apple strudel is equally popular in the Czech Republic. Whereas the more traditional strudel recipes include a stewed apple filling, more recent versions are baked with a cottage cheese filling and sprinkled with poppy seeds.

Despite pernik, the Czech version of gingerbread, is only seasonal it’s definitely worth a mention. Highly popular and distinctive in flavour, due to the wide range of spices used in its preparation, this sweet is generally baked into cookie shapes, decorated with icing sugar and shared with friends and family over the Christmas period.