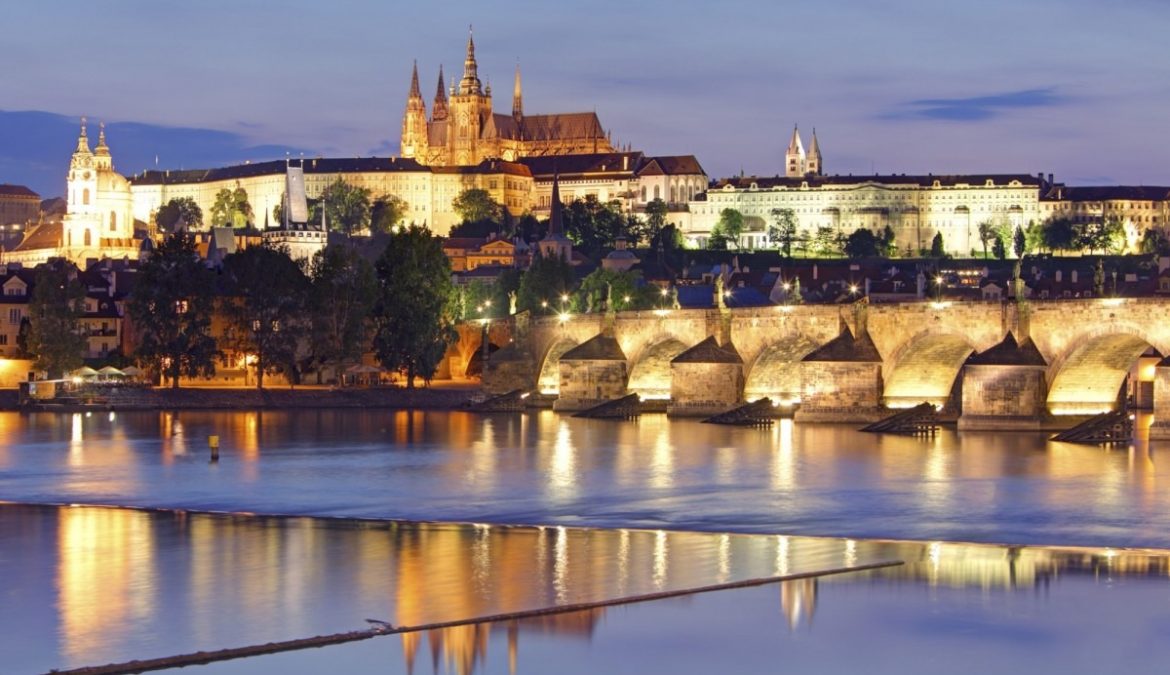 From stunning palaces to winding gardens, ancient cathedrals and impressive art galleries, here’s what to look out for in the Prague Castle Complex.

Considered the largest ancient castle in the world, the Prague Castle Complex today represents a variety of historical and cultural sites and buildings including towering cathedrals, royal palaces, art galleries, and some of the prettiest gardens we’ve ever seen. Built on a hilltop, this vast fortress was established by Prince Bořivoj around 800 AD, and has since then housed a long line of kings and queens. With such a rich and colourful history, it should come as no surprise that UNESCO has awarded the capital’s most popular attraction World Heritage status. With so much ground to cover, we figured that this simple guide might come in handy should you choose to ever visit.

Take in the entire view – the towers, the spires, the scenery; snap a mental image before you enter and you’re suddenly filled with anticipation of what comes next. The Old Royal Palace was first founded back in the 9th century, and has since been remodelled and reconstructed extensively, including an 80-year period of abandonment. Today, the Old Royal Palace is the centrepiece of the Prague Castle Complex, with its impressive Vladislav Hall known for its high vaulted gothic ceilings and early Renaissance stained-glass windows. Considered an important State building for centuries, today presidential elections for the Czech Republic are carried out here.

How does it feel to look at Prague’s most significant temple? A visit to St Vitus Cathedral will answer that. Not only celebrated for its long history of coronations, this cathedral is also known for housing the tomb of St Wenceslas, known as the good duke of Bohemia. Expect a patchwork of artistic and architectural styles within the building, with the first stone being laid in the 14th century, and final works carried out in 1929. Keep an eye out for the temple’s ornate bronze doors, the stunning frescos, and the ornate stained glass windows.

Venture along to the secluded confines of the castle’s secondary courtyard and discover centuries of fine art housed within the Prague Castle Picture Gallery. From Titian to Rubens, and a large number of Czech painters, this impressive collection once formed part of the private collection of Holy Roman Emperor Rudolph II.

After a morning of intense culture, a leisurely stroll along the majestic royal gardens might sound just about right. The perfectly landscaped lawns are reminiscent of Renaissance serenity, and feature a number of quiet places to sit down, relax, and soak up the scenery. Plan a stop at the Italianate Summer Palace, which was built for Queen Anne by her husband Ferdinand I and today houses various creative and artistic events and exhibitions.

Running along the northern walls of the castle, the Golden Lane is a quaint alley dotted with colourful cottages and cobbled pavements, allowing visitors to walk along old Prague. Built in the 16th century with the intention of housing the servants working at the neighbouring castle, the old city became increasingly popular amongst Prague’s artists and literary folk during the 20th century, including the little blue cottage number 22 home to world famous Franz Kafka.

Once the home of an aristocratic dynasty before being seized by the Nazi army, the Lobkowicz Palace is the only private property within the Prague Castle Complex. Today, the building exhibits an unorthodox selection of fine art, religious objects and furniture, as well as an enormous library. There are free classical music concerts held daily, which are generally hosted in the elaborate 17th century baroque concert hall.